Skip to content
BLACK FRIDAY SALEGet 60% - 75% OFF for our biggest sale of the year!
Free shippingon domestic orders $75+

Everyone who visits our house comments on how cute it is. My chihuahua loves it. Good quality. 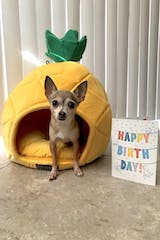 Good quality & weight. Added a few blankets & my chihuahua loves to burrow into the bed. Plus it’s super cute!

J
MY BFF GRUMPY THE ALPACA J.P.
Not bad but gets oh so dirty too quickly

Our Border Collie received this one as a gift from her Auntie - LOVES this one - the soft squeak in the head and the crunchie body is so much fun for her. BC’s have fantastic sharp teeth and usually toys last a minute barely. She has had this for over three weeks and even though I have to wash it more often, it is holding up!

I purchased the crown bed for my Boston Terrier puppy— it seemed the perfect thing for our new princess. I had no idea at the time the bed would be her fav resting spot, giant chew toy and jungle gym. It is seemingly indestructible as it has held up to her “love”. We continue to marvel at the quality of this product— it is the best pet purchase we have ever made. We look forward to enjoying more Nandog products in the future!

My dog is a destructive chewer so when I buy a toy I buy it with the intentions of it. It lasting long. I bought this toy due to the hair type or deal on the leaves of the pjnrapppe because she she was a baby she had a toy made of similar material.
I gave it to her and she WENT NUTS IMMEDIATELY. and it wasn’t until I got home and looked this item up that I saw it even had a squeaker!

Just like Bear, our Old English Sheepdog (Bruno) has one of these toys (named Cal for Calamari) and it is absolutely his BFF. They go everywhere together, completely inseparable. He’s at this moment asleep with him in his paws!! Please please make some more. 🙏

I bought this toy for my 1 1/2 year old German Shepard for Easter and she loves it!

I use this for my cat and she loves curling up in the corner. I think she has felt more comfy on car trips with it.

This is the first toy my dog has tried to rip apart, but so far it's holding up well.

I was absolutely amazed at how durable this stuffed toy is. Normally my pitbull fur baby simply destroys any plush toy hat gets in seconds, ripping them open and pulling the stuffing out like it's his mission on earth. It took him over a week to just get the brand tag off and another month to get the stuffing removed. Needless to say I'm now a believer in the quality and will be a return customer for any future plush toy purchases

I have a Boston terrier puppy and this stuffie has been her most favourite ever.
She will chew and paw it in true Boston style until she falls asleep.
It’s six months on and is still holding up.

I got this tan octopus toy for my German Shepherd (Bear) the same day I adopted him at 6 weeks old. He became so emotionally attached to this thing that it went everywhere with him. Bear would pick it up on his way out of the house to go to the vet, the dog park, road trips; so to say the least, it saw the washing machine a lot, but I made sure he never slept a night without it.

Bear turned a year old and the octopus lost one of its legs. No big deal, i just sewed it right back on. Bear started carrying it around more carefully than before and he wouldn’t play with it as much anymore in the same ways that he used to. One day he got the toy exceptionally dirty. Bear doesn’t like rain/storms, so it wasn’t unusual for him to take octopus outside with him to hold in his mouth while the weather was crappy. He got it completely covered in mud so i put the toy in the washer and that was it. It had completely fallen apart.

This toy lasted my dog until he was nearly 2 years old, and now I can’t find a plush that he won’t immediately shred to pieces. I would pay double the price of this toy just to get Bear to stop moping around the house, or hopping up to look into the washer to double check that it’s not still in there.

You made a fantastic product.

We bought this octopus for my frenchie in dark blue and it has been his favourite toy! He sits and cuddles with it through the day and snuggles with it to sleep at night. We were lucky and found him a spare but we have not been able to find them again since! I really hope you carry them again soon!

While my Frenchies have adapted, overall the bed is just to small. Please consider offering a large small size option. The quality is, however, nice.

My dogs couldn’t wait to climb into this silky super soft bed. The crown motif fits beautifully into any decor and is just more interesting visually than other dog beds! I bought two. Love them!

My 5 lb Chinese Crested absolutely loves the bed and the accompanying toy! I love the quality of the bed, its plushness and the saturated rust orange color. I’ve washed the bed a few times and it has maintained its shape, plushness, and color.

We LOVE your alpaca stuffy! It was actually our 3 year dog’s first stuffy as a puppy, and she still carries it everywhere. She tosses and swings it around and plays tug with it. We decided to get a second new, shiny one, and she’s loving it!
She was also in love with her new sloth and carried it around with her everywhere the first day, but sadly on day two she tore it open at the seam and started pulling out the stuffing 😥.

Our dog, Sonny, enjoys playing and cuddling with this toy.

Our Golden Retriever, Sonny, absolutely loves this toy, making its crackling sound as he plays with it.
However, Sonny’s 2-legged “Mom” and “Dad” were expecting the toy’s body to be more fully filled instead of being so flat.

I’m a first time dog owner so I was nervous about making this purchase not knowing what type of bed a small Chorkie needed. My Chorkie loves it!!! In fact as of the last two weeks it is the only thing he hasn’t peed on lol but great material and super comfy for small dogs!